I was invited by one of our London dev teams to facilitate their retrospective yesterday. I’m far from an expert in facilitating retros, although I enjoy it, and I find that I learn a huge amount from doing so.

Anyhow, I decided to try out my retro ice-breaker exercise which I call Empathy Snap, the aim of which is not only to discover the important features (‘big hitters’) of the last iteration for each team member, but also to see how well team members are aware of the big hitters of their fellow team members. In this way, aspects of the team dynamic can be explored, and dialogue is opened up in a way which immediately requires consideration of others – a useful starting point for a retrospective.

We had one SNAP out of the team of 8 (the red asterisks), but the mismatches also provide very useful insights into the team dynamic: 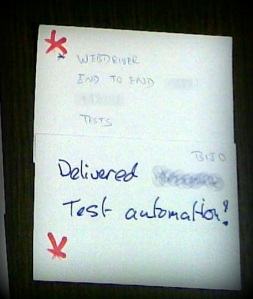 The team found it useful, so I think we’ll try it next time too. A variation of the exercise can use separate cards for ‘good’ and ‘bad’ big hitters, so doubling the number of cards, and requiring each team member to decide on a good and a bad thing for the person they are considering.

Update: a version of Empathy Snap is featured in the book Fun Retrospectives by @paulocaroli and @caetano_tc: https://leanpub.com/funretrospectives

Update 3: Guillaume Charmetant evolved the ‘SNAP’ with a ‘high five’:

Did this today in sprint retro, thanks @matthewpskelton!https://t.co/gw84dGIZMS

Update 4: 2017-05-17 – edited the order of the cards to be Name then Big Hitter following feedback at an agile coaching weekend. This made the exercise clearer for people taking part.

Update 6: in the UK, ‘Snap’ is a children’s card game where you try to match pairs of cards. When you get a match, you shout “SNAP!”.